After reading many of my fellow colleagues' travel blogs I have come to the conclusion that we are all unknowingly very similar, some would say near carbon copies. Thus, I have taken it upon myself to blaze new trails and explore unknown corners of the blogosphere. "But how do you plan to do this when the format doesn't lend itself to divergence?" you might ask. Well, it's simple. I have decided to start out the next few blogs with a haiku. If blatant gimmicks don't set me apart from the multitudes of American students that study abroad every year, then I'm not sure anything can.

Haikus are hard-ish
But I needed a gimmick
I apologize

After some thought, I have decided that maybe an opening haiku is not the most effective way to distinguish my blog. I'll think on it some more and hopefully come up with something dazzling that will assure you, my valued reader, that your time here with me has not been ill spent. Don't worry it will come to me, and it will be amazing and original and totally not something that I decided on after spending fifteen minutes Google searching the phrase "how to set my blog apart from the rest," but I digress.

A lot has transpired since my last posting. I have successfully completed half of my two week intensive language course, selected my classes, and visited Casablanca over the weekend. I am currently experience the kind of fatigue that is only possible when every aspect of your being has been stressed. It is corporal, it is mental and it is emotional. And it sucks. I am attempted to attribute the majority of the blame to the language courses, but that wouldn't be accurate. Every aspect of my current life in Morocco is fatiguing and stressful to one degree or another. Especially my recent trip to Casablanca, which I'll be sure to explain in greater detail towards the end of this post. 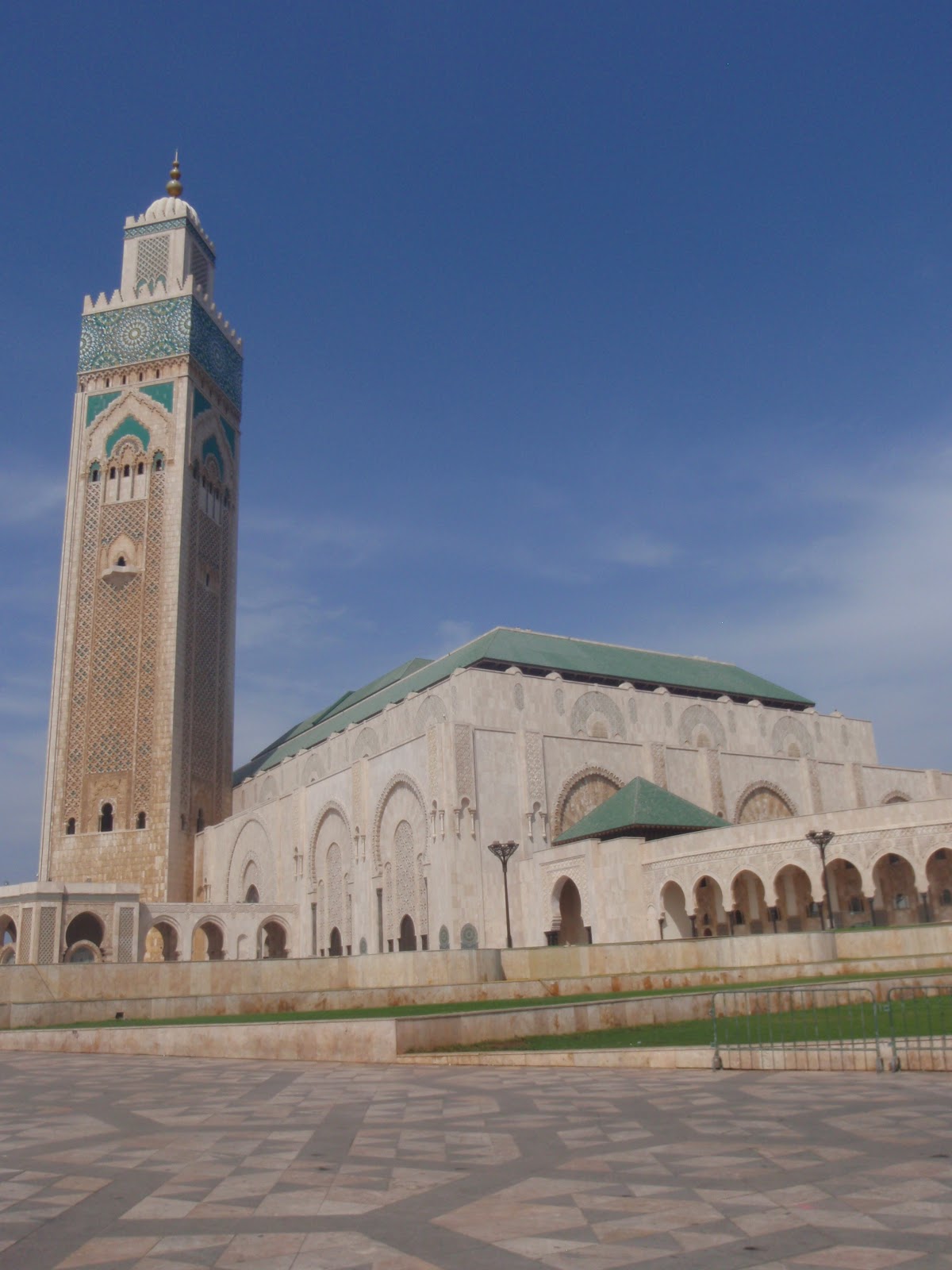 A small taste of my trip to Casablanca

Weekend excursions not withstanding, there are still plenty of things here that make life complicated. I'm slowly learning how to navigate this city's public transportation system, but so far every time I take the bus I have to be constantly alert. Even if I achieve the proper amount of alertness there is still an 80 percent chance that I will end up accidentally riding to the end of the route and not realize it until the bus driver gives me a dirty look. Yes, that has happened.

My trip to Casablanca was quite eventful. So much happened in a small 24 hour period that I probably will not be able to fit all of it here. So I've decided to discuss a few highlights that are still fresh in my memory. The excursion started out relatively simply. A group of students took the train from Rabat to Casablanca for a mere 35MDH (approximately 4USD) and headed straight for the Mosque of Hassan II, one of the few mosques in the Muslim world that allows non-Muslims to enter. This is what the picture above is of, and what the following few are of as well. After this little touristy visit the group of 12 set out for a light lunch. The lunch went well, no complaints were heard among any of the students.

However, after the meal the group split. Six of us had decided that we wanted to experience more of Casablanca than just a guided visit and an afternoon snack. Therefore we stayed in Casablanca for the night while the others opted to return home. Little did we know, we were in for a weekend that was anything but relaxing.

After being ripped off by a cab driver, who made us pay double for a three dollar cab ride (I know it doesn't sound that bad, but I've been spoiled by the low cab fair here), we realized that we weren't anywhere near the hotel that we had planned on staying in, and had to walk to the other side of the old medina. Once we found the hotel we asked the price and the owner proceeded to try and over charge us. In case you haven't noticed, this tends to happen to people who look like tourists. With my blonde hair and blue eyes I may as well have a giant dollar sign written on my forehead. Admittedly, that I might still blend in better with that on my forehead if I had brown hair and a tan. So, after deciding against the overpriced hotel we went to the Youth Hostel, which turned out to be full.

Just when we thought all hope was lost, however, we met the sketchiest guardian angel I have ever met. His name was Willy, he overheard us speaking English and told us that he could help us. We weren't very trusting at first, but the others started to be more willing to accept his help after he showed us his American passport and a cab driver's license from San Francisco. I still do not trust him. These two factors change nothing except the fact that we could have been murdered by an American citizen who happened to drive taxis. Despite my misgivings, we followed him to some quaint accommodations. L'hotel la Victoire was a house that had been turned into a hotel. It was small, it was minimally furnished, but it was cheap. After that we had a fairly agreeable adventure exploring our little corner of Casablanca. But once we had all safely returned to our hometown of Rabat, the resounding consensus was we would not be returning to Casablanca any time soon. Here's looking at you, Kid. And just so I don't end it on that predictable note, here are some pictures from the weekend. 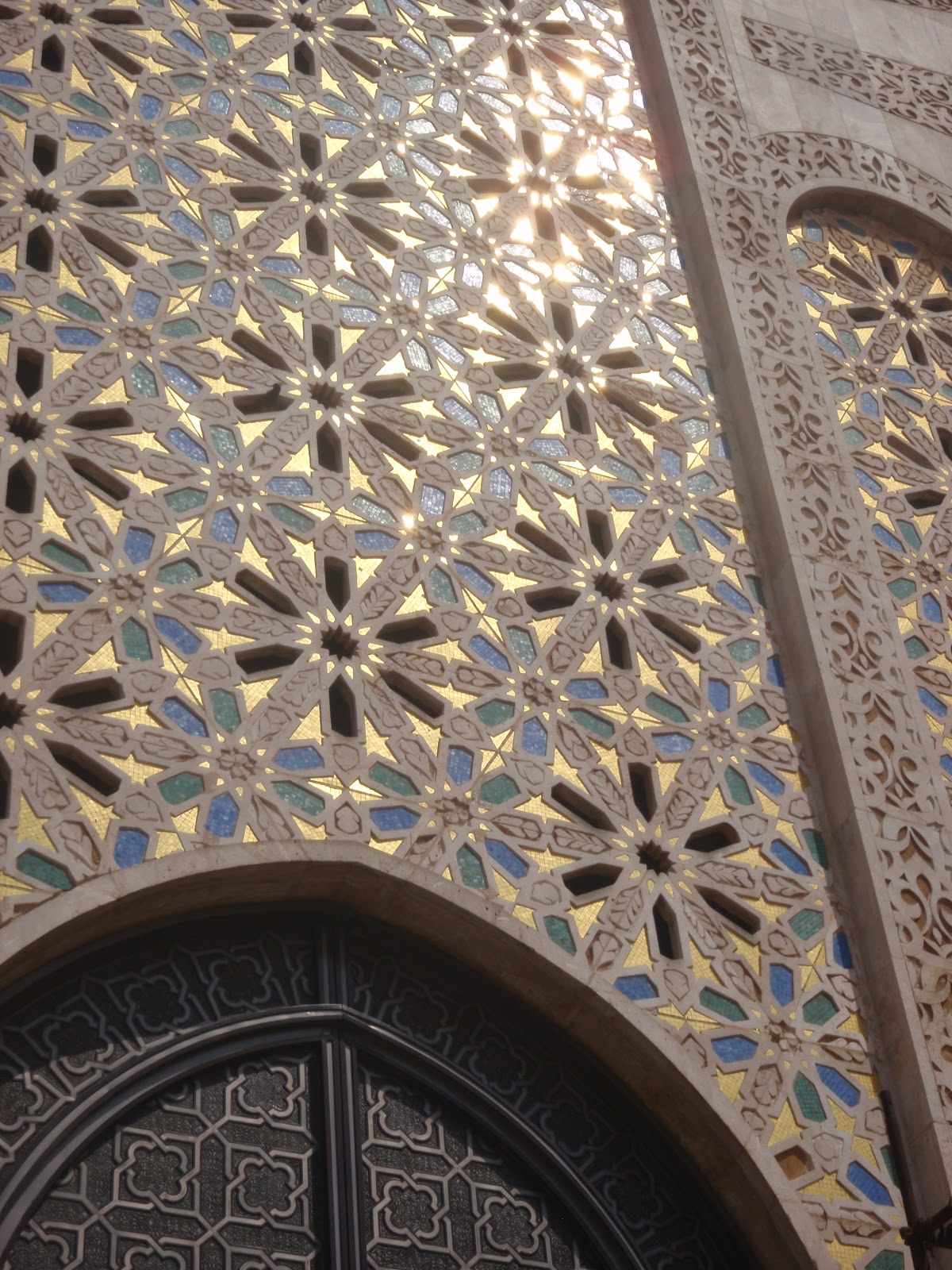 A close up of the mosque 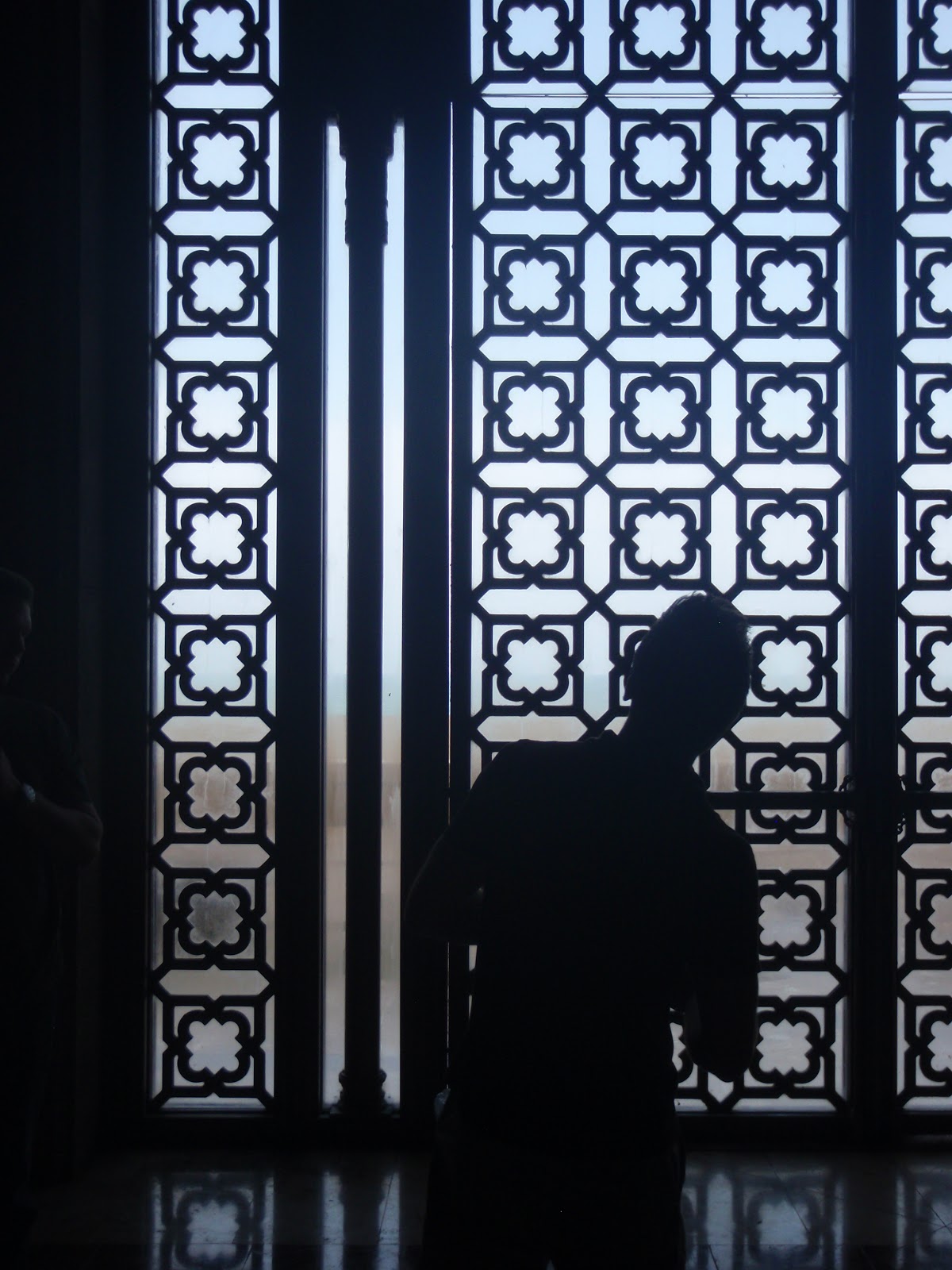 The view from the inside of the mosque.

Some of the detail inside the mosque. 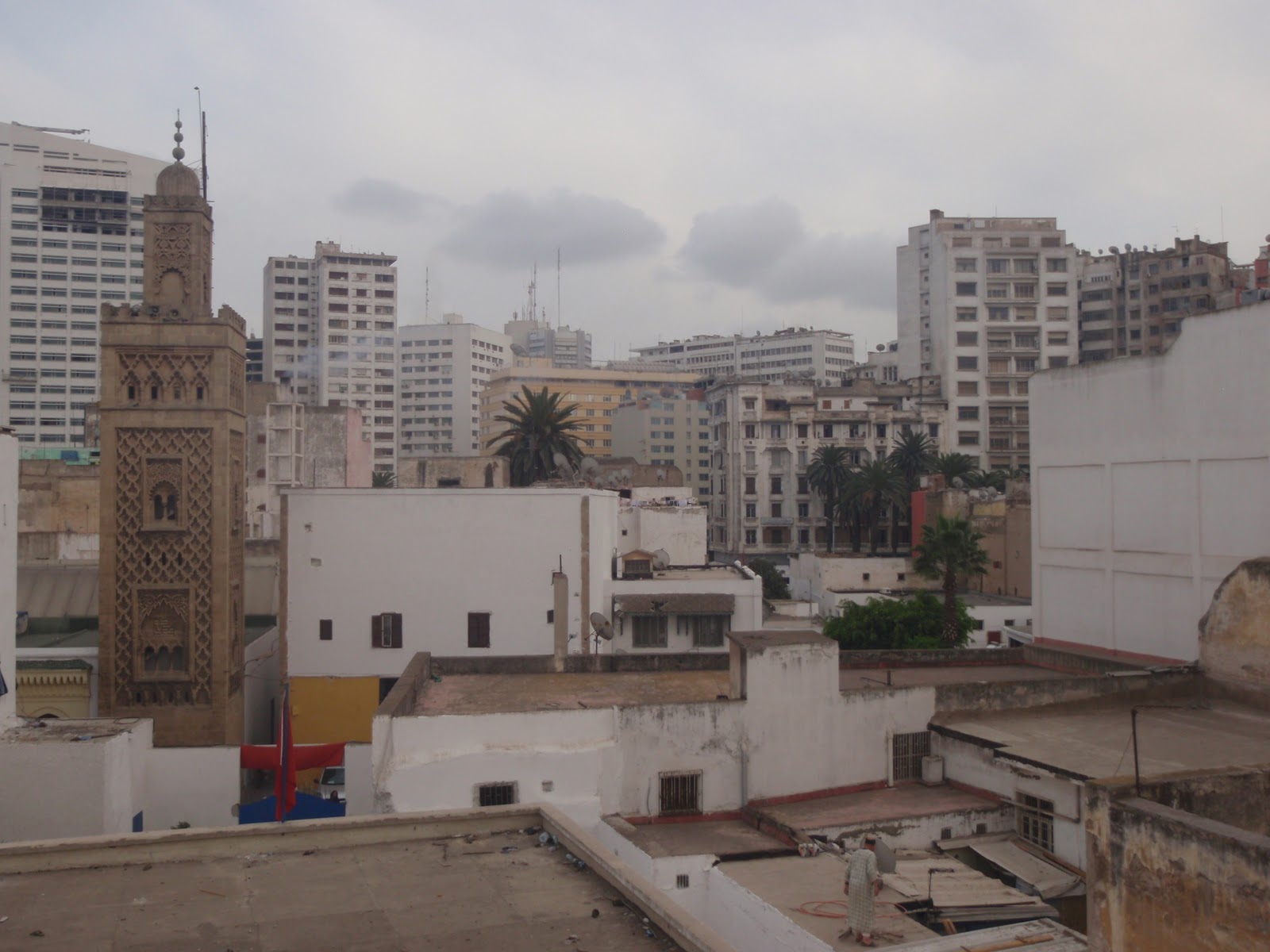 The view from our hotel room. 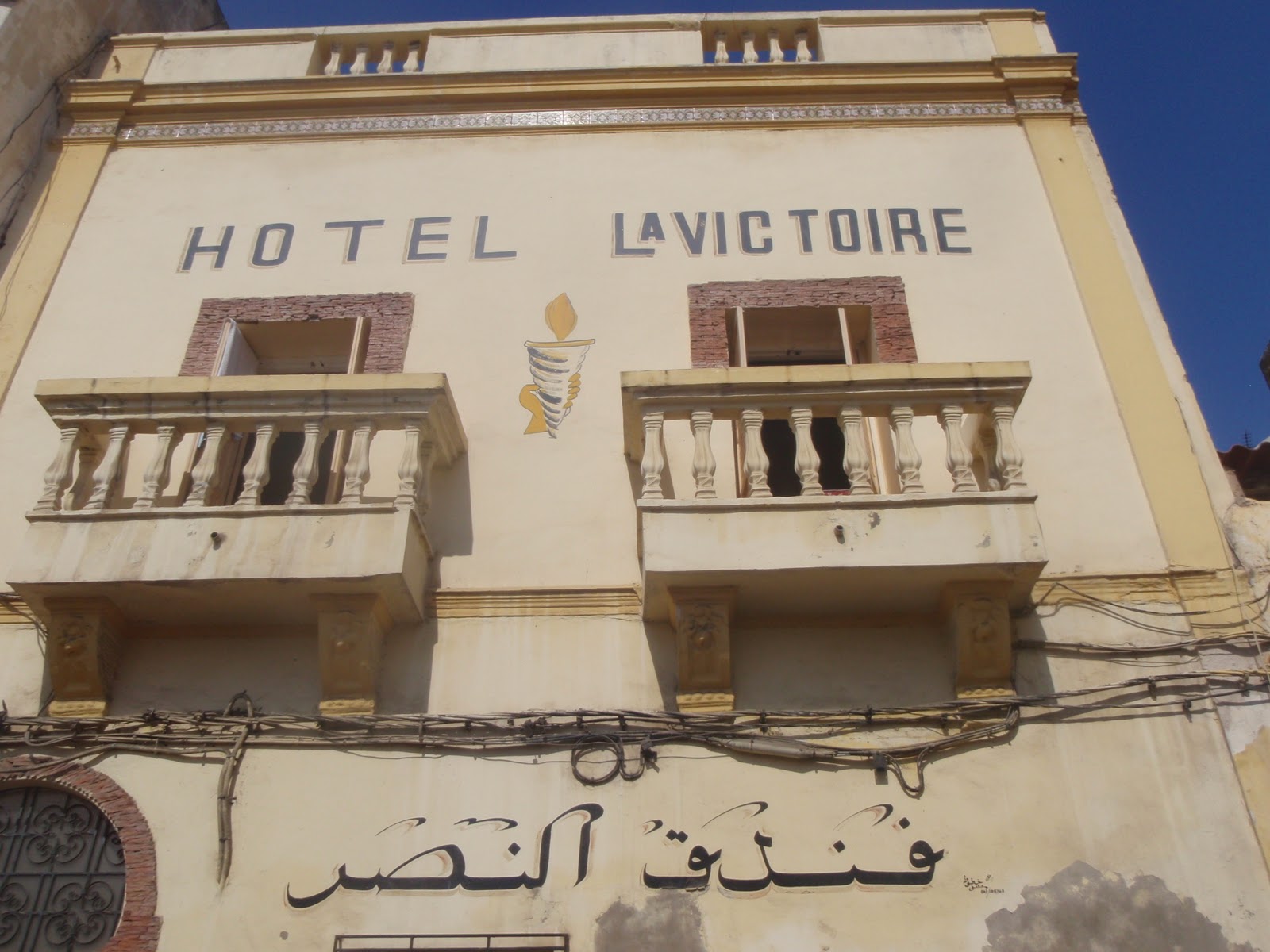 The front of our hotel room.

If you made it all the way to the end of this post, I'd just like to say thank you. I know it wasn't very short, and I may have confused quantity and quality a bit, but nevertheless thanks for taking the time.